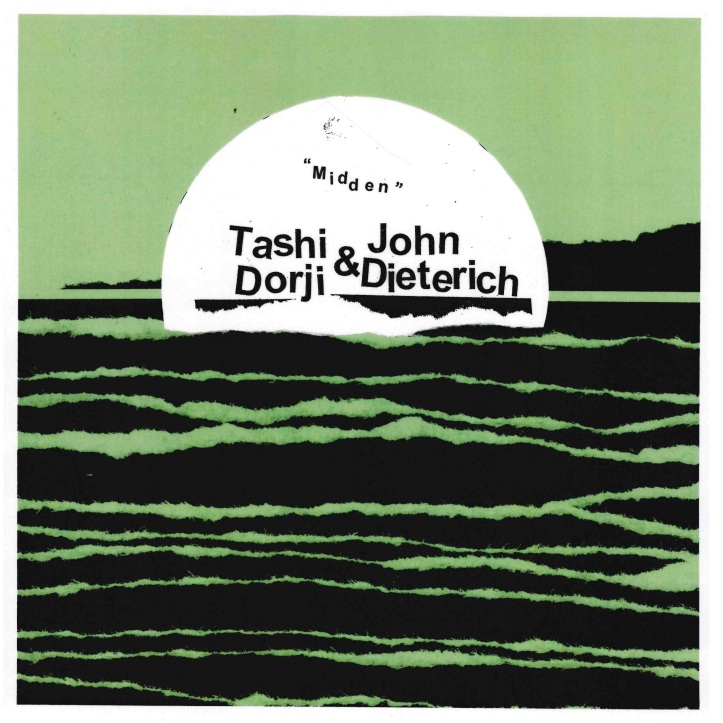 News from the frontal lobe:

Good Evening. Our program directors have informed us that between our regularly scheduled self-destructive behavior (i.e. intropunitive thoughts & actions) we bring you the collaboration “Midden” from Bhutanese guitarist Tashi Dorji and Deerhoof’s own John Dieterich. Both Dorji and Dieterich are prolific artists who relentlessly churn out new material at remarkable pace. These are seldom rushed, though. A large body of work produced quickly can often leave the impression that very little thought or effort had been utilized in the creative process. This is not the case for either party involved. There is a lot of intention in the Midden album, released on Gilgongo Records and Moone Records, respectively. Even the transitional period sounds like the brain piecing together information to reach a conclusion. When that conclusion hits, it’s something magical.

There are no song titles. Playing through the vinyl record it has little to no breaks between sequences. Occasionally you’ll recognize a pause where they shift gears, but most of the album is in a stream of consciousness. That’s not to say that it’s disorganized at all. Every note and sequence sounds intentional and really presents the talents of Dorji and Dieterich. There are points in the album where you can tell where Dorji is and where Dieterich is. Dorji has more discipline and patience where Dieterich can be a bit impatient in his contributions. You can hear some parts where Dieterich can’t help but create the beginnings of what could become traditional melodies. This works because they’re disintegrated before they can form, but it’s still telling where his comfort zone is.

I really like this album. The percussive guitars and production really stand out with clarity and even with its free jazz proclivities, it never really sounds confused. Again, you can hear the brain working it out. Going from alien world to 1970’s Italian horror film score (more Frizzi than Goblin), Midden is a driving and emotional work that really express the talents of Tashi Dorji and John Dieterich. I would like to see them work together again someday.